Here are some common causes of chimney fires and preventative measures:

My friend John was lucky.

He and his family were snuggled in front of the fire on a cold winter night, enjoying the warmth and comfort it provided, when they suddenly heard a loud noise coming from the fireplace.

They quickly realized that the noise was actually a chimney fire, and if they hadn’t been so vigilant in watching it, the whole house could have gone up in flames.

The experience was a wake-up call for John and his wife. They did some research and discovered that chimney fires are actually quite common, and that the main cause is creosote build-up.

Creosote is a highly flammable, dark brown substance that coats the inside of the chimney and can easily catch fire if it’s thick enough.

In order to prevent a similar incident from happening again, John made a few changes to his fireplace habits.

He only burns seasoned hardwood (wood with a moisture content of no more than 20%), and he always keeps the damper open during a fire to ensure adequate airflow.

He also had a Chimney Safety Institute of America-certified chimney sweep inspect his fireplace and chimney for damage and clean them annually.

Thanks to these preventive measures, John and his family can enjoy fires in their fireplace safely and without worry.

Chimney Fires and How to Stop Them at Home

A chimney is very important in every kitchen or fireplace. It removes dangerous gases like carbon dioxide and soot, which could otherwise accumulate in the whole house, causing health issues to the people in the house.

Besides, the chimney also makes your fire burn well and in a controlled manner. However, while a chimney is supposed to be of help to the house, it can turn out to be hazardous if not taken good care of.

Chimney fires often occur, and it’s essential to prevent them to ensure your home is safe.

There are different things that cause chimney fires that everyone using a fireplace should watch out for. One of the things is dirt in your chimney, another thing is using the wrong type of wood and and unburnt tars.

How to Stop Chimney Fires 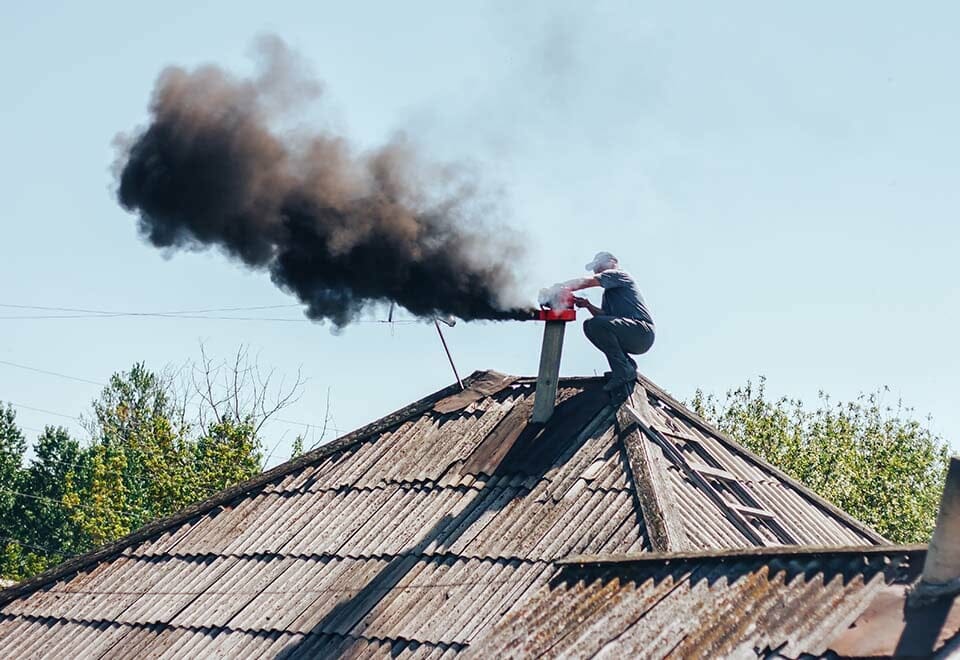 When you know the problems that can result in chimney fires, it’s simple to stop them. There are different solutions offered to prevent chimney fires;

When your chimney is dirty, it will be prone to chimney fires. The firewood you are using to warm your room or to create a good atmosphere in your room causes soot in your chimney, and some unburnt pieces of firewood can also hang in the chimney, which can cause a fire. Cleaning your chimney is the only way to stop this kind of fire.

Make sure you sweep your chimney at least once a month if you are actively using your fireplace. Sweeting your chimney will save you the stress of having a chimney fire.

If you use pellets, you won’t have the problem of chimney fires. However, you must be very keen if you are using firewood and logs in your fireplace. Firewood and logs will produce black soot.

Not everything is burnt down, and the remains get trapped in the chimney, which causes the fires. You should be keen on the type of wood you are using as well as the size of the log. Some types of wood don’t burn clean and should be avoided.

Have Enough Air Circulation in the Chimney

The chimney will allow cold air from the outside in and hot air from the inside out. This should happen smoothly by allowing enough space for this. Enough air circulation enables the wood to burn well, preventing creosote buildup.

You should keep the chimney open if you use wood in your fireplace throughout the period. Chimney fires are very dangerous since they can take down your entire home.

This can be a very big loss that not even an insurance cover can compensate, so take the necessary precautions.

Calling a professional when your chimney has a problem that leads to fires is the best action you can take. A professional will rectify the situation and advise you on how to avoid messing up next time.

You will also be comfortable knowing that your chimney was inspected and the problem diagnosed and solved; hence you can light your fire at peace. Ensure the technician of your choice is certified.

Chimney fires are very dangerous, and it’s crucial for every homeowner to take the correct precautions to avoid chimney fires. Your fireplace should serve its purpose and not cause destruction so avoid careless mistakes.

Cleanness is the most important factor that must be observed to avoid chimney fires. If you can’t sweep the chimney by yourself, you can hire someone who will do so.

Even if you haven’t experienced a chimney fire, you need to have your chimney checked every year to detect any issue that could be building up causing chimney fires.

To install new chimney flashing, you will need...
Chimneys

How to Repair Chimney Flashing [11 Steps]

Here are the steps to repair chimney flashing: Remove...
Chimneys

Here’s How to Waterproof Your Chimney & Prevent Chimney Leaks

Choosing a waterproofing product is important, as is...
Chimneys

How to Repair a Damaged Chimney Crown [5+ Steps]

If your chimney crown is cracked or deteriorating,...